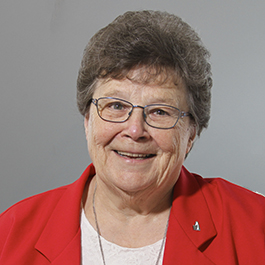 Sister Mary Louise Degenhart, A.S.C., M.B.A., FASHP, is special assistant
to the president at the St. Louis College of Pharmacy and a former pharmacy administrator who was instrumental in the growth of pharmacy residency programs.

Sister Mary Louise, a member of the religious community of Adorers of the Blood of Christ, has served in several pharmacy administration positions planning and implementing state-of-the-art practice. During all of her practice career, she has worked toward advancing a well-trained core of pharmacy technicians and for more than 40 years has devoted a substantial portion of her professional efforts to the growth and development of pharmacy residency and technician training programs. She was a member of ASHP’s Accreditation Services Division (1989–95) and then served as a contract surveyor until March 2015.

Sister Mary Louise was the director of healthcare facilities sponsored by the Adorers of the Blood of Christ (1996–2003). For the seven years that followed, she collaborated with others to establish a ministry of reconciliation in a troubled neighborhood on the south side of Chicago. In early 2011, Sister Mary Louise accepted the position of special assistant to the president at the St. Louis College of Pharmacy. In addition to her profession, she has devoted a significant amount of time to volunteer efforts for church, hospice, and mental health.

Sister Mary Louise is an active leader in professional organizations and was one of the founders of the Southern Illinois Society of Hospital Pharmacists and the Illinois Council of Health-System Pharmacists.